Peter Owen, born Peter Offenstadt in Nuremberg, Bavaria to Anglo-German Jewish parents, was sent at the age of five to live with his grandmother in England. That was in 1933, and the young Peter had already seen enough of the rise of Nazism to be haunted by vivid and chilling memories of the time for the rest of his life.

A lonely childhood engendered a love of reading, fuelled by books from his Uncle's library. At age 21, Peter started his first publishing venture in partnership with literary agent Neville Armstrong and investor Malcolm Kirk. ‘In those days paper was strictly rationed,’ he said, ‘so I chatted up a girl in the Board of Trade. She felt sorry for me and allotted me a quota of six tons – enough to publish twelve books. With that, and £20 demob pay, I was launched into publishing.’

In April 1951 he struck out on his own, founding Peter Owen Publishers, operating from the garage of his West London home and handling much of the sales, packing and distribution himself.

Peter Owen was a pioneer in many fields of publishing: gay rights, women's issues, social issues, drug culture, ecology, counter-culture, translations and specialist non-fiction. He made lasting friends – and sometimes enemies – of many of the authors he published. He had a treasury of anecdotes about them, as well as other notables he encountered while travelling the world to secure works by an eclectic mix of the obscure and the notorious, from cult figures to Nobel laureates. They included Ezra Pound, Anaïs Nin, Henry Miller, Jean Cocteau, Herman Hesse, Paul Bowles, Salvador Dali, Yukio Mishima, Lawrence Durrell, Tariq Ali, Yoko Ono, Muriel Spark, Marcel Marceau, Fiona Pitt-Kethley and Shere Hite ... to name but a few.

James Nye was Peter Owen’s literary assistant toward the end of his life, and collaborated with him in the writing of his memoirs. After Peter’s death, his daughter Antonia Owen asked James to complete the work.

You have to be willing to work like a dog for at least five years to make a go of it as an independent publisher. An amateur must not touch it. Only someone who knows the trade stands a chance. 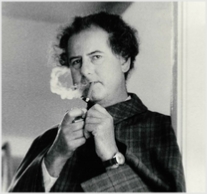