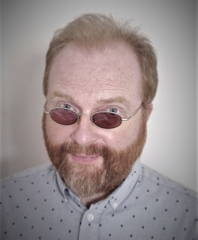 James Nye, who assisted the late Peter Owen in creating his memoir Not a Nice Jewish Boy and has written a thoughtful and perceptive afterword, is a writer and composer.

Born in Suffolk in 1966, Nye has spent much of his life on the Isle of Wight. After becoming a Master of Music in Analytical Musicology at the University of Surrey in 1987, he lectured in music then worked in bookselling before devoting himself to writing and composition. For many he years he assisted comedian and playwright Ken Campbell and has written for several publications including Fortean Times and Gneurosis.

He has published interviews with illusionist Derren Brown, author Robert Anton Wilson and philosopher and ex-Blondie bass guitarist Valentine Lachman. His recollections of an encounter and brief friendship with American composer John Cage were published in The Wire.

Not A Nice Jewish Boy, his first book, was published by Fonthill Media on 14 October 2021.