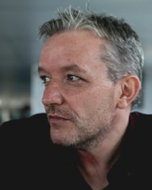 Paul Ferris was born in Lisburn, Northern Ireland and, aged 16, became the youngest ever debutant with Newcastle United in 1981.

After just 13 matches, however, a medial ligament injury meant a career re-think. He trained in physiotherapy and in 1993 returned to Newcastle United as physio under Kevin Keegan’s management.

Meanwhile, he was studying part-time for a masters degree in the history of ideas, and in 2006 took the Bar Vocational Course to qualify as a barrister.

Three years later, Alan Shearer brought him back to United as part of his management team.

Paul’s extraordinary autobiography The Boy on the Shed was snapped up by Hodder & Stoughton, and published on 22 February 2018. The Boy on the Shed was chosen by both The Times and The Sunday Times critics Robert Crampton and Nick Pitt as their Sports Book of the Year for 2018, The Telegraph named it Football Book of the Year, and it was a finalist (top seven) for the William Hill Sports Book of the Year 2018. In June 2019, it won The Daily Telegraph Sports Autobiography of the Year. An adaptation for television is now in development.

The reviews are in, and they’re enthusiastic to say the least. Just a few of the shorter ones here:

‘Untimely death and tragedy has been as much the story of Ferris’s life as scoring for Newcastle. The Boy on the Shed is a stirring testament to the strength of the human condition and the power of ideas.’ — Paul Rowan, The Sunday Times

‘I finished it in two sittings and couldn’t put it down. What a remarkable piece of writing. Life, death, love, leaving home, motherly relationships, striving, all weaved into the football journey and every page I found myself relating to his experiences, some very personal. Very moving (had me several times) but also funny. So much more than a sporting memoir. You could take so much from it without an interest in football. I loved it.’ — Simon Bird, Daily Mirror