Critical acclaim for The Boy on the Shed 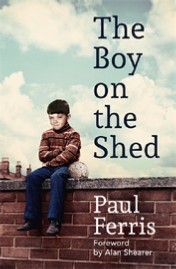 ’Most sports autobiographies are penned by those who have reached the pinnacle in their chosen field: the O’Driscolls, Keanes and Agassis of this world. When written well, they provide insight into the single-mindedness that drives the finest athletes to succeed. Sometimes, however, the stories of those who strive for greatness and fall short can be just as compelling. Paul Ferris’s The Boy on the Shed is one of those stories.

‘Not that Ferris was a failure by any barometer. The youngest footballer ever to play for Newcastle United when he made his debut at 16. Ferris narrates his own early steps in the game with an aplomb that’s reminiscent of Nick Hornby’s brilliant Fever Pitch. He’s also a natural storyteller.

‘Most modern footballers are schooled in media savvy as well as ball skills, parroting glib clichés instead of venturing anything resembling an actual opinion, so it’s refreshing to read someone unafraid to express their passion for the game he so obviously loves. One of the best sporting memoirs you’re likely to read this year.’ — John Walshe, Sunday Business Post

‘Paul Ferris is also very funny, as sharp and smart as anyone you could meet inside football, or outside. You may not know him, or know of him – but The Boy on the Shed could change that. Ferris has written a book that transcends genres.

‘Ferris writes with the sort of fluency that, on the pitch, once impressed peers such as Paul Gascoigne. The book is billed as ‘a sporting memoir’ but it is rather more than that. There is plenty more football detail but Ferris has gone beyond standard sports autobiographies. The Boy on the Shed is of a time and place, of Ireland, of Northern Ireland, of growing up a Catholic on a Protestant estate in Lisburn in the 1970s. It is a story of everyday sectarianism and its effects. It is about hate.

‘But Ferris’s story is also, powerfully about love. Love of his children, love of his wife, of football and of his parents. It’s Seamus Heaney – When all the Others Were Away at Mass.

‘His has been some experience, defying a certain snobbery about sporting autobiographies. Yet how many other professions enable working class boys to tell their story?

‘These books offer a window on another world. Paul Ferris spent much of his childhood in Lisburn looking through one. What he saw, how he understood it and didn’t understand it, is gripping.’ — Michael Walker, The Irish Times

‘Untimely death and tragedy has been as much the story of Ferris’ life as scoring for Newcastle. The Boy on the Shed is a stirring testament to the strength of the human condition and the power of ideas.’ — Paul Rowan, The Sunday Times

‘I finished it in two sittings and couldn’t put it down. What a remarkable piece of writing. Life, death, love, leaving home, motherly relationships, striving, all weaved into the football journey and every page I found myself relating to his experiences, some very personal.

‘Very moving (had me several times) but also funny. So much more than a sporting memoir. You could take so much from it without an interest in football. I loved it.’ — Simon Bird, Daily Mirror

‘Donegal summers and English football – intersect at the beginning of Paul Ferris’s tightly observed memoir of a life defined by an early brush with football.

‘It is partly a meditation on the effects of leaving home while little more than a child and adjusting to the relative safety of England’s declining industrial cities while Northern Ireland – home – raged. And it is also a shuddering reminiscence on the loneliness and strangeness of life for the hundreds of gifted young footballers who tried to cut it as professionals in the decades when duty-of-care to youngsters was primitive and casual.

‘In a way, there are two books contained within here. Ferris’s life as a Troubles-era youngster is adroitly told and heartfelt. However his football career as almost-star-turned-in-house staff is grippingly delivered. Ferris, through his early bad luck, could have become one of the victims of the game but was smart enough to navigate his own path to become, as Shearer notes in the foreword “a fighter and a writer.”’ — Keith Duggan, Irish Times

‘I read this book in one sitting – something I’ve never managed before. I wondered afterwards why I’d connected so strongly with this book and I’ve realised it was the writing. Paul’s experiences in growing up in Lisburn and the highs and lows of football are not unique – but his style had me gripped. Often in football autobiographies, I skim through the “growing-up” chapters because they’re all the same – but with The Boy on the Shed, that’s where the gold is. It’s also far funnier than I was expecting. If I read a better sport book than this in 2018, it will have been a very good year.’ — Matt Williams, Sports Producer: The Simon Mayo Show