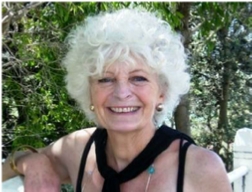 Born in Australia, Felicity Fair Thompson grew up just near the Sydney Harbour bridge. In England she started out as a ballet dancer, then worked for eight years as Senior Assistant Manager at the Odeon Leicester Square. Now she is a writer and film maker and lives on the Isle of Wight. She has an MA in Screenwriting UAL. Her documentary Carisbrooke Castle was broadcast on SKY TV and three of her other fourteen independently made travel films for the retail market, were shown on Australian television.

Exit the King, performed at the 2017 Ventnor Isle of Wight Fringe Festival, and in January 2018 at Carisbrooke Castle, was her first stage play. Now she and the historian Tim Wander have combined their writing talents to produce two new stage plays. Voices over Passchendaele was performed at Northwood House on the Armistice weekend 2018 to mark 100 years since the end of WWI. The second play The Power Behind the Microphone, with the same central character, is due to be performed in Chelmsford 2020 as part of the celebrations to mark the start of radio broadcasting at Marconi Radio.