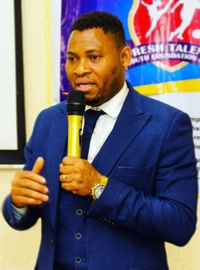 Ese Sunday Oduko was born in Lagos, Nigeria. Officially, his birthday was 5 December 1982, although by his calculation he may have been born some time between 1976 and 1978. He is the second of six children; the whereabouts of one sister are at present unknown.

His mother is from Delta State, Nigeria. He doesn’t know his father, whom he believes to be from Ondo State. The family moved to Delta State with Ese’s grandparents when he was very young, and there he attended Agbarho Primary and Secondary Schools. He completed his secondary education at Delta Careers College, Warri.

Life was desperately hard in Lagos, where football became central to his life. Imprisoned for a crime that was actually committed by his brother, Ese left Nigeria a month after his release and began a journey that was to last three years, through desert and across the borders of other African countries. He slept rough and played football, eventually being taken up by Jeanne d’Arc Football Club in Senegal. While there, he was scouted to go to France.

In Europe, he played for, among others, Stade Rennes youth team (France), AC Caserana (Italy), Victoria Wanderers and Valetta (Malta). In 2003 he arrived in England, playing for, coaching and managing teams including Aston Clinton, Real Holmesdale and Wolverton Town. In 2008 he married Ify, and they have two beautiful children – a boy called Ruks and a girl, Tega.

Currently, Ese is the CEO of Fresh Talents Ltd UK, which works to discover and bring on new talent in football and the performing arts. Through Fresh Talents he also runs a charity foundation in Nigeria dedicated to transforming the lives of talented but underprivileged youths, helping them to develop themselves in football, the performing arts and film production. He is working with a state government in Nigeria to build a football academy, including a school and a hospital, that will occupy a 100 acre plot..

The extraordinary story of Ese’s life is currently in development as a television drama series with a UK production company, and will be filmed in Nigeria, South Africa and France.