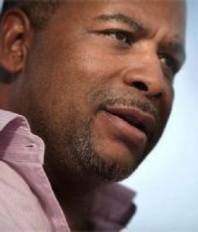 Michael Misick is a former Premier and Chief Minister of the Turks and Caicos Islands.

Born in 1966, he grew up in North Caicos and studied business and law in the US and UK. He spent several years in the private sector before his election to the Turks and Caicos Legislative Council in 1991. In 2002 he was elected leader of the opposition Progressive National Party, and after a general election the following year he was sworn in as Chief Minister (an office which changed to Premier in 2006.)

Allegations of corruption in the country led to him resigning in 2009. In 2012 he was arrested in Brazil at the request of the UK government, an episode that led to more than a year of detention in Brazilian jails before his eventual extradition to Turks and Caicos. His trial – on charges of conspiracy to recieve bribes, conspiracy to defraud the government and money laundering – eventually began in 2016 and has yet to conclude.

Michael Misick has almost completed the writing of his autobiography, Paradise Lost.

In his book, he speaks frankly of his triumphs and mistakes, his extravagant lifestyle, friendships with Hollywood actors and romantic involvements with a string of glamorous women. Staunch in his denial of any wrongdoing, he is nevertheless as tough on himself as he is on those who have opposed him.

The final chapters of the book will be written as the trial unfolds.