Keith R. Lindsay started out in the world of television situation comedy, team writing on the highly successful Birds of a Feather series and signing an exclusive contract with producers Alomo Productions to contribute material to their portfolio of shows and create original concepts.

Keith has written for sketch shows including Hale & Pace and stand-up material for Rik Mayall and has storylined for Crossroads.

His current projects include the situation comedies Geeks, The Last Married Couple and Bad Company; and Trackerz, a comedy drama series.

Keith collaborated with John Sullivan (Only Fools and Horses) on the spin-off series Green Green Grass, featuring the characters Boycie and Marlene (pictured below centre), and co-wrote episodes with John for the third series. These included the 2007 Christmas Special, The Special Relationship, which featured George Wendt (barfly Norm Peterson in Cheers, pictured below left with John Challis) as an ex-GI searching for his children in Boycie’s home village, where he was billeted in the 1970s. John Sullivan commissioned Keith as the only outside writer (other than his son) to write The Special Relationship in view of his success with other episodes. 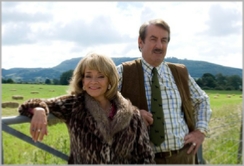