Has been the Member of Parliament (MP) for Rayleigh and Wickford, previously Rayleigh, since the 2001 general election.

In 2018, he was appointed deputy chair and de facto whip of the eurosceptic European Research Group (ERG) by chair Jacob Rees-Mogg. He was a critic of the leadership of Theresa May during her time as leader of the Conservative Party. In March 2020 he became the Chair of the ERG

In essence, Mark’s book Spartan Victory is the story of how the British Establishment tried to steal the referendum result and how 28 utterly determined Conservative MPs managed to stop them from succeeding. It could perhaps be describedas “The Darkest Hour” meets “House of Cards.”

The book, which has had good write-ups/podcasts in everything from the Telegraph to The Spectator, is a personal account and the first four chapters deal with Mark’s early life and getting into Parliament from fairly humble beginnings.

However, the crux of the book is what Mark has christened “The Battle for Brexit” - from the Referendum in 2016 to finally leaving the EU in January 2020 and all the Parliamentary and media shenanigans in between.

FRA are representing Mark for the sale of TV rights to the book. 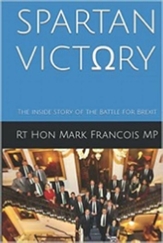