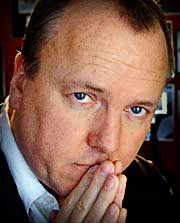 Nick Battle has enjoyed a long and varied career in the music industry. He was in seventies rock band After The Fire, worked at IRS records in the eighties as an A&R man (his first top 10 hit was the novelty record by Karel Fialka Hey Matthew).

He was a record plugger from 1988-1993 and his clients included George Benson, Sir Cliff Richard, Ronnie Wood, Take That, Clannad, and Paul Hardcastle among many others.

In 1993 he helped start the music publisher Windswept Pacific Music Ltd and introduced Simon Fuller (his former client) and the Spice Girls to the company. At the height of the company's success they enjoyed 44 top 40 hits in one year with a team of just two creative staff.

He has had his songs recorded by the actress Jane Horrocks, Sir Cliff Richard and Phixx, and has written with Gary Barlow, Tony Swain, Chris Eaton and David Grant.

As an Executive Producer in the noughties he has made records with Russell Watson, Michael Ball (four albums) the Honeyriders and Engelbert Humperdinck. Michael and Engelbert also recorded Nick’s songs.

He is in demand as a great judge of the popular song and has served on the Ivor Novello Awards committee as well as the MPA Pop Publishers committee, and was also hired by Simon Cowell to provide invaluable research to the Syco group of companies.

Between 1993 and 2003 his first wife fought a ten year battle with cancer and this has led to him founding the Gravel Road Trust, a registered charity for carers and patients dealing with long term illness and also the bereaved.

In 2008 he wrote his autobiography, Big Boys Don’t Cry and subsequently two more books, The Daily Male 1 and 2 followed. He has featured as a special guest on Aled Jones Good Morning Sunday, has presented the BBC’s Faith In England podcast as well as hosting BBC Three Counties programme Melting Pot for a month last year. He is regularly featured on BBC local radio stations as a music business pundit. More recently he has featured on The Jeremy Vine Show on Radio 2 talking about music, sex and celebrity. He has his own radio show, Men @ Work, on Saturday nights at 8.00pm on Premier, on national DAB/Sky 0123/Freeview and MW across the capital.

Nick is currently working on the second novel of The Billy Fidget Chronicles with Eric Delve for Hodder & Stoughton, as well as crafting his first solo novel, Linger, which he describes as being all about what happens when “men forget what matters most”.