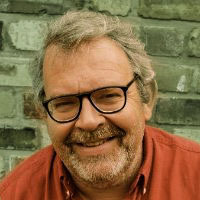 Larry Barker started his career in advertising and is the creator of many highly awarded campaigns – taking top prizes at the British Television Awards, New York’s Clio’s and at Cannes.

His work has ranged from the visually arresting (Levi’s ‘Swimmer’, the original Haagen Dazs ‘sexy’ campaign and the launch of the Orange brand) – to the smart and witty (Alliance & Leicester, Foster’s, Barclaycard).

It afforded him the opportunity to write for, and work with, some major talent – Stephen Fry, Hugh Laurie, Harry Enfield and Paul Hogan, to name but a few, and to collaborate with top directors including Stephen Frears, Peter Chelsom, Jonathan Glazer, Tarsem and Tom Hooper (the last three of whom he gave their first big break!)

Having risen to the top of the ladder (Executive Creative Director of the world’s most creative agency and President of D&AD – advertising’s ‘Oscars’) he realised that he was becoming increasingly removed from the thing he loved most – writing and shooting. So, he decided to commit himself to writing for the screen.

Larry has secured options on his first three screenplays, has two others in development and is in constant demand for projects that require anything from a sensitive re-write to a page one overhaul. He is currently working on a commissioned screenplay about the 1st century Jewish-Roman historian Josephus.

He is the son of Ronnie Barker.