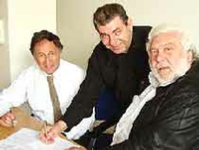 Geordie ‘Tappy’ was there at the beginning when Eric Burdon and the boys formed The Animals.

He was there when they recorded their anthem House of the Rising Sun.

He was there at the end when they re-formed for a world tour in the early 80s.

He was also there when unknown guitarist Jimi Hendrix played to a handful of punters in a smoky American club and next day recorded one of his biggest hits, Hey Joe.

He regularly took Jimi and his band to the VD clinic as groupies gave them more than their bodies.

Among many others, Tappy looked after superstar Tina Turner and her fiery husband Ike on their first ever tour of the UK. He has seen it all, done it all, been jailed, ‘press ganged’ into the US Army as a deserter, came close to joining The Monkees, was witness to and victim of early racism in the music business and has seen drugs kill and destroy. He single-handedly defeated the Spanish Armada’s attack on London, during a bad acid trip on LSD.

And he knows the real reason Hendrix and his manager Chas Chandler parted company at the height of his fame.

Tappy’s love of music and his ability to be in the right place at the right time have led to a fascinating life: from playing 2nd guitar with The Animals as they began to form, to working with rock legends from Tina Turner, Little Richard and The Who to Sammy Davies Jnr and Dusty Springfield. He now divides his time between Florida and his native Whitley Bay near Newcastle.

Funny, revealing, even frightening in parts, the author blows open the world of rock and roll in the 60s, 70s and 80s, including an explosive revelation about the death of a rock legend that will shock the music industry.